Upbringing and lifestyle, comments and painting 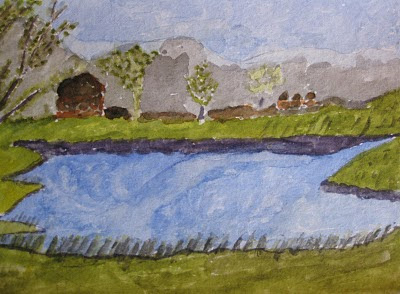 "The lake where we fish" by K.L. Mallett

Comments sometimes get buried on blogs. This one below got so buried that I have only just noticed that it is there. I apologize Laci.

I think this one should not be buried at all and I am moving it onto the postings page. Since I decided to do this I fiddled around doing a million other things I have now discovered that Laci has also responded on his own blog, thanks for that too Laci:

As you know, I have no Internet for a long while and at the same time my life became happy and busy since end of March this year.

The time that I can spend next to my computer or on the net and blogging is very limited, it is just too difficult. However, to find a little time to read you (and my former blog community's posts) is always uplifting activity.

Thank you for doing this. It is very valuable thing.

The Makarenko topic is a kind of key point to understanding CE. We, who were raised in Hungary before 1989 have had an education at school and many of us at home too what is refered to as socialist education. In Hungary, the lifestyle things and education were different from the Sovjet but the socialist moral, ethic and collectivisim were on the same base that that really 'produced' different people.

CE was thought to be practiced in that environment. It is not a secret.

Since CE has arrived to the west only some people wanted to understand CE as a whole; embeded in an ideology. The ideological conflict between West and East never led CE to be taken as it was. Of course, CE was too socialist (maybe communist).

Nowadays, the tendency to discover some values of the Eastern European psychology and education is growing. Your new blog will shed light upon the ideology of CE - which anyway has already started changing.
Good luck, and I wish you a lot of readers.

K.L. Mallett who painted the picture at the top is my Dad.

My Dad started to join me painting at the living-room table about four years ago using the water colours that I gave him as a present when he retired, fifteen years previously. He is one of the wonderful people I know who shows me constantly how upbringing never stops. I suppose it really must be called lifestyle when one reaches eighty-four, as he just has.

Whatever it is that we call it, lifestyle or upbringing, conductive or something else, my father shows me continuosly how adaption is the name of the game! He shows me how life goes on even after sixty years of being everyday with the same person and suddenly finding yourself all alone. He paints wonderful pictures in the long, lonely evenings and mostly he gives them to me. He finds it hard to understand why I love them so much but they are sent to me never-the-less.

The rest of the family are eager to start a collection of his paintings too. They all now receive their handmade birthday, Christmas and Easter cards and my Dad does admit that it gives him pleasure to see that we enjoy them so much.

My dad is still spiralling in his eighties! Not only in his life as an artist, but also as a cook and a caring neighbour and as a wonderful great-grandfather, a role that he just loves.