Family upbringing as the Soviets describe it and.... 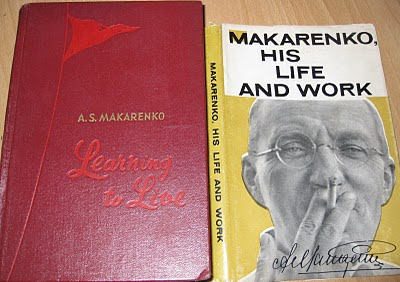 I have at last found something to kick off my new conductive upbringing blog. In fact in the end I plumped for two pieces from my collection.

The second is something of my own about Makarenko and his work that I originally published on “Conductor”:

Family Upbringing: as described in The Great Soviet Encyclopedia

The systematic, purposeful influence of the adult members of a family and family ways on the child. The main, general objective of family upbringing is to prepare children for life under existing social conditions. The more narrow, specific objective is to make sure that children master the knowledge, skills, and habits necessary for normal personality development in the family.

The goals and means of family upbringing are determined by the socioeconomic structure and the level of cultural development. Family upbringing is usually organized on the basis of the ideology, morality, and system of interpersonal relations in the social stratum to which the family belongs. It is inextricably linked with adult self-education and with the development in adults of qualities and character traits that ensure an effective pedagogical influence on children.

Among the main aspects of family upbringing are constant but unobtrusive guidance of the child’s activity, including play and, later, participation in domestic affairs. Family upbringing also includes helping children to broaden their ideological and intellectual outlook and providing serious thoughtful explanations of phenomena about which children should know and in which they show an interest. Another important part of family upbringing is the formation of higher moral qualities in children, including collectivism, patriotism, internationalism, respect for elders, honesty and truthfulness, discipline and a conscientious attitude toward family obligations, a solicitous attitude toward things as the results of human labor, and a love for nature and an ability to perceive its beauty. Family upbringing also involves acquainting children with works of literature and art and encouraging them to participate in physical exercise and sports. Pedagogical science orients parents toward gradually increasing the scope and complexity of the information provided in family upbringing and toward systematically raising the demands on children as they grow older.

During the child’s kindergarten and school experience, the main trend in family upbringing is toward continuously coordinating the efforts of the parents and institutions. The unity between educational influences in the family and the school expresses the unity of social and family principles in raising the future builders of communism. The adult members of the family help children with their studies and with the rational use of free time to further their comprehensive development.

References were made to:

The following "snippet"describes my joy in discovering Makarenko

Now I am collecting books on Upbringing!

I am slowing getting through the reading that I missed when I was at the PAI training to be a conductor.

Now I receive copies of papers from some of the NICE conductors, things that they had given them in their training, and recommended reading from several sources.

This week I have finished reading all three volumes of The Road to Life (An Epic of Education) by A.S.Makarenko, in a lovely 1951 Soviet English translation. I read the first volume over a year ago and I have just tracked down the second two through Abe Books. They were actually sent to me from a disused church in my home town, Norwich. All three volumes are in quite good condition and smell delicious, good enough to eat!

I was hooked after the first volume and I had been impatient to read on, to discover more about Makarenko's work and life so, as I spied the small parcel on the stairs one morning earlier this month, I unpacked it with glee.

I have been reading Makarenko to and from work all week, in my lunch hours, and even on the tram to the theatre. I would have read in the interval of Joan Baez if there had been one. Now I am hooked on his writings and I feel myself a Makarenkoist through and though

Tears, not sad ones

A. S. Mararenko makes me cry.

I cried often while reading these three volumes. Not because of the desperate state of affairs that he describes, because he makes even the accounts of all the work to be done full of optimism and somehow a wonderful thing. The need to move onwards, developing and creating, going through new hardships, all this doesn’t make me cry either.

He makes me cry mostly because I realise as I read further, that I have been right all the time. Right to enthuse over every tiny thing that a child says, or does, or sees, or is excited about. It is what my Mum did and what my Dad did and still does with me. My life changed when I left that environment at eighteen, I missed it very much, but I took this skill with me. I incorporated my parents' ability to enjoy and enthuse over the little things in life, to be thrilled by every change in development, and to encourage further interest and adventure. The ability to take time. I believe too that I share their ability in transferring this enthusiasm to others.

I realised while reading A. S. M. that I have been right all these years to delight in all that children and adults do. I discovered that I am right not to have been deterred when someone asked me to hurry up when I listened to the detailed explanation given to me by children or by adult clients of something that they had experienced. Where else will someone find the time to listen and try to understand, if not in my group?

I realise that I am right to value how, in my work as a conductor, time itselfseems to stand still. Time allows me to enthuse, to be delighted and thrilled by the small things in life, time allows me to notice these things. Just as it did when I was a child, poking under leaves looking at frogs with my Dad. (Oh no, I forgot that happened last Easter!)

Please sir, I want some more

I have finished the books now and I want more of the same. Maybe I will go on to the Lectures for Parents, maybe I will watch the 1953 Soviet film The Road to Life.

I felt that it was so important for me to write about, to enthuse about and to share my excitement about what I have been reading, but I really don’t know at this stage what more to say.

Doubtless I will return to A. S. M., but this is all for now.

Since writing the posting above on "Conductor" I have also read the following books by A.S. Makarenko and several papers by V.A.Sukhomlinskii. I will post some of my favourite snippets from these wonderful books over the next few weeks. Until then do not forget the invitation on the left had side of the blog, please send some of your favourite snippets to post here.