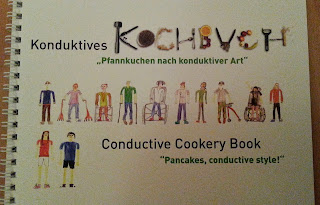 Hot off the press!

‘There are as many ways of practising conductive upbringing and lifestyle as there are styles of preparing pancakes!’

This really was a last-minute job, but it arrived this evening and it looks lovely.
Everyone rallied round to help Évi get her first publication ready for the Congress so now we all are breathing a sigh of relief that we have copies in our hands. The book looks and feels, and smells, lovely!

Congratulations to Évi and the conductive cookery group

You can order them through me at: small66711@aol.com

As Évi writes in her “Pancakes, conductive style” introduction –

‘Cooking is an activity in which many people feel at a disadvantage, perhaps even find themselves disabled, whether they have a motor disorder or not. How many of us say that we cannot even boil an egg!’

'From their enthusiasm, active planning, practice at home, and a wish to share their joy of achievement with friends and family, has blossomed a new project, a cookery book, a place to present some of the recipes that the group have tried and tested.'

Posted by Susie Mallett at 23:26 No comments:


The wheels on the bus go round and round

‘Come on, who wants to sing a song that you sing at home with Mum or Dad?’

That is what my colleague and I asked our multi-lingual group of 3 to 5 year-olds during the last fifteen minutes of the recent block of sessions in the integrated Kindergarten.

We had five children with us and five languages so we expected to hear German French, Arabic, Russian or Turkish.

Tears in my eyes

We had one hand go up and what joy it was to hear the five-year-old Russian girl sing, in perfect tune, with wonderful English pronunciation and with all the actions, several verses of The Wheels of the Bus go Round-and-Round! We had actually expected a Russian song from her so to get a delightful performance of this popular English children’s song was a bonus to round off another lovely morning at work. It was extra special for us as we considered the difficult start that this child has had in her life. She is now thriving in our Pető/Montessori integrated, and international, Kindergarten.

This group changes each year, children come from the crèche or from home and others go off to school but, however many changes there are, the group seems to get more international and multi-lingual than ever. At the moment there are five Pető children and two conductors, this gives us a total of seven people with seven languages, with all but one speaking German as their second language.

Life is certainly interesting in our work.

As well as disability becoming something not at all unusual for our little ones being foreign is not at all foreign to them either, if you know what I mean.

In the whole group of fifteen children we also have a child with one Mum from Tanzania and another with Dad from South America.

Out of ten members of staff there are also many countries represented. Hungarians are in the majority, with four and there are three Germans. There is a lady who is French, another from Irak, and me.

I think it is about time we put on a show that presents the international-ness of our integration, perhaps we wiill then hear the Russian children's song that we were hoping to hear this week!

Posted by Susie Mallett at 16:34 No comments:

Films at the Congress 8 and elsewhere

Rehabilitation, upbringing and more, all on film

There will be a CE Cinema at the Congress, I have no idea how I will get time to watch a film, although I expect they will be short films so it might be possible to visit the cinema for 15 minutes each day if I plan well and do not chat too much!!!

As I write I am listening to a review on BBC Radio Four’s Front Row, of a documentary film that was premiered in January 2013, a film that I will certainly make an effort to see in a real-life cinema –

Posted by Susie Mallett at 20:49 No comments:

WCCE 2013 (conductive upbringing – that is what it is all about!)

I am so glad that I encouraged the organisers of the 8th World Congress for Conductive Education to invite attorney Ralph Strzalkowski to take part as a keynote speaker, and, after difficulties in getting the initial communications started, so happy that he accepted. Ralph has already started his journey from Florida to Europe and he is already getting lots of publicity back home.
I received this Google Alert three times today –

I have been following Ralph’s story’s since he began blogging and I was pipped-at-the-post when Conductive Education Press got in there first with an offer to publish a book containing an edited selection of his postings. I would have loved to have had the honour of re-telling Ralph’s stories in one of my narratives in my book series Conductive Lifestyles, but it does not matter who publishes it what is important is that Ralph’s story gets written and heard. The book should be available at the Congress, you can read about its making on Ralph’s blog –

You can read about Ralph’s preparations for his journey on his blog too and also get to know him a little bit and begin to wonder what stories he might be narrating in his Keynote speech. I, for one, am very much looking forward to meeting and hearing him next week.

Just a few more snippets about the book and the travelling

And this is one of my favourites –

Posted by Susie Mallett at 20:58 No comments: