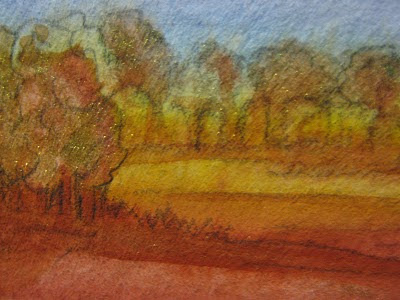 I have been reading through a pile of magazines that had been lent to me by my conductor colleague. They are rather special magazines and not only because they are printed on good quality paper and are full with glossy pictures. They also contain material of an exceptionally high quality.

These are the magazines that parents of children attending Waldorf schools in Germany receive every month. I actually could not believe that they really are monthly publications so I had a second check. They definitely are.

The title of the magazine is ErzeihungsKUNST. The Art of Upbringing. The front covers are advertising such goodies inside as:

Everybody is an artist? rudolf Steiner's thoughts in colours and shapes

To walk To speak To think

Learning from yourself and others

I have a small publication too from the same source called: ”Wacheln die Zähne- wackelt die Seele” “ When the teeth wiggle the soul wiggles too”. It is a book full of advice for parents and other upbringers on what changes are going on in the lives of children when they begin to loose their milk teeth and the new ones appear. In Germany this coincides just about exactly with the first day of school!

Surrounded by so many inspired pieces of writing I thought that there must be something in these publications suitable for me to mention here on my new blog. I expect that there is but I cannot get down to specific articles just yet, as the whole concept of Waldorf schools, and upbringing in Germany, is keeping my thoughts busy at the moment.

Last night I was just sitting at the kitchen table where the magazines have been resting for a couple of months now. It is the place where I read an article from them now and then over breakfast or with a last-thing-at-night cup of tea. The mass of material in the six magazines that I have is very impressive. Most of them are written by teachers who work in the many schools around the country.

I was taking photographs of the covers to accompany a posting one day and I thought about how lucky I am to live in Germany, a country where there is so much written about upbringing and where the soul is mentioned on every second page, or so it seems.

It is special for me to live in a country where the upbringing of children is talked about and written about and not only in these rather special magazines from the Rudolf Steiner schools but also in the flyers and advertisements for courses that we receive from the local government departments responsible for Kindergartens. They too are informing the family about the importance of upbringing and the healthy soul.

What else was I thinking?

As always when I get onto this subject I thought a lot about AP.

I wonder whether we need to look quite so far as the Soviet methods of upbringing when searching for what could have been amongst András Petö’s thoughts, ideas or motivations for developing his conductive upbringing. András Petö’s life was part-Hungarian but is that where his upbringing comes from? He was also Austrian and German, (with I think a bit of French thrown in). He must have known as much about the upbringing of children as is practised in Austria as I know, if not more. He knew about the upbringing of children in Hungary, he may well have been interested in the methods of upbringing that was beginning to be spoken about in Russia.

There are so many books in German, written by the doctors, educators, pedagogues and other practitioners who were developing different methods and following different philosophies at the time when Petö was living and working in Austria.

Maybe for him, what he experienced in Austria fitted in with his ideas, just I have the feeling that conductive upbringing just fits to the German family way of life!

There is so much speculation about what is the background. Questions like: Where did AP develop many of his ideas?

I wonder is we need look much further than the end of our noses. Here in Germany, especially in the Waldorf schools, upbringing is extremely important and not so far removed in some cases from what we read in Makarenko’s A Road to Life. There are schools with art workshops, and craft workshops, market gardens and small farms. There are learning centres for people with disabilities, people living there or attending courses, finding solutions to problems so that life can be lived enjoyably.

During Petö’s work in various clinics in Austria he would almost certainly have come across, and may have even worked with, the many methods that he writes about in his two books. Methods used by various practitioners all aiming to unite a healthy body and a healthy soul in the attempt to rid a person or illness. It is what is on offer still to clients in the many clinics up and down the country in Germany, the places one goes to when in need of rehabilitation of body and soul.

András Petö would probably have know about all the different pedagogical and upbringing methods being developed and experimented with at the same time.

As I sat there with my pile of magazines and note book late last night I thought that yes they may be a lot glossier that the papers Petö was involved in producing. The book on wiggly souls and teeth may be more modern than the two books that I have read by A.P., but are the contents really so far removed from each other?

Conductive upbringing (Förderung as it is called here) fits in well to the system, the lifestyle, in Germany. Of course we have to struggle to find the finances just as people do all over the world, but the lifestyle of the Germans, the philosophy behind various pedagogical systems or forms of upbringing has helped the acceptance of the method in many small pockets around the country. Places that are developing systems that work within and alongside the German “norm”, (if there is a German norm).

My colleague, the conductor who gave me the lovely magazines to read, and I still dream our dream of finding a Waldorf school to take our Kindergarten graduates and having conductors working alongside the teachers in Waldorf schools. If I was twenty years younger I may have even contemplated a Waldorf School teacher-training!

Where we are and who we are

I was wondering too as I sat with my magazines, late night cuppa, my thoughts and Andrew Sutton’s late night posting, how much Anne Wittig’s work in BC might be influenced by her German upbringing.

I know how my work as a conductor is shaped and formed as much by my own rather special upbringing in England as it is by the influences of the country that I now choose to live in. It also is shaped by my experiences working as an art therapist in a Makarenko-style centre in England, but I think that living in a country that knows about uniting the soul with upbringing and education allows me the freedom to work as I do.

How much of the influences of the countries that András Petö chose to live in were incorporated into his work when he returned to Hungary we may never really know. And an even more important question to which we may also never know the answer is: which countries were they?

Despite having no answers, I still could not help thinking as I sat there with my thoughts and healthy soul last night that I am lucky to be working as a conductor in Germany. Sometimes some things just fit into place more easily than if I was really as British as I sometimes think I am. These are times when I am wondering about the reasons why AP developed konduktiv nevelés in the way that he did!


And maybe for a German conductor working in BC sometimes some things will just fit in to place more easily too.