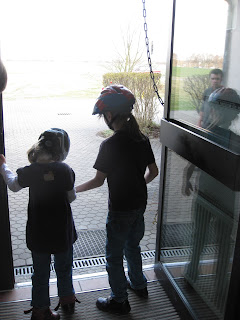 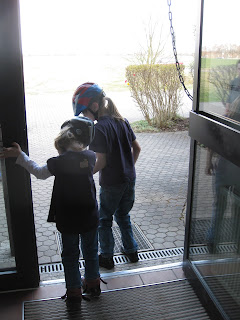 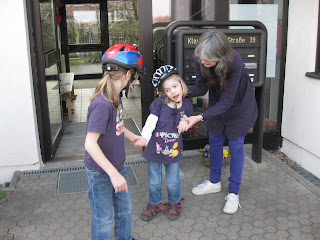 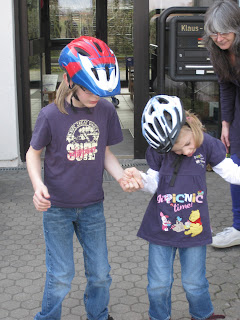 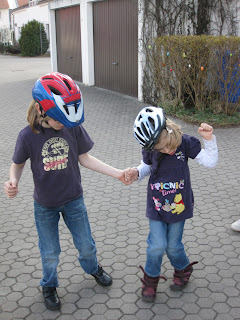 A compromise was found and they walked on the pavement and were still out there practising when their Mums arrived to take them home. Oh, how they would have loved to immediately be able to walk home together - only 500 metres to Littlie’s home, but  even that short distance would take them hours and even we did not have time for that. They will practise and with their determination I know that one day they will make it. It may take them another seven years to learn , but as they learn their already close friendship will grow.
I very much hope that I am there to witness the day that these two special friends walk home together hand-in-hand.
The experience that I described above had me and both mums wiping tears from the corners of our eyes. When we reach the moment when I am no longer needed to help the children along I am sure we will all need a supply of handkerchiefs to wipe away our tears of joy.
Rarely have I had two children in my groups who pay so much attention to each other’s needs that they are able to work in this way with each other. We often pair the children up to play games, sometimes while sitting and sometimes when standing or walking. Off course all the children like to help their playmates to succeed but they do not usually concentrate as these too did. There was a special bond between Jolly Prof. and Little Princess that allowed them to walk so well together. They care very much for each other and watch intently what the other one is doing, not only while walking but in everything they do together. Whether playing football, reading, chatting and laughing their eyes rarely leave each other.
Over the next few years the amount of work at and after school will increase and the amount of time available for conductive group work is bound to decrease. Already I am planning how I will be able to provide these two friends, and the other children in our after-school group, with the opportunity to meet in their teenage years. The social development of these children is just as important to them, and to me, as their physical development.
I observe how the relationships that my sister and my Dad both still have with their old school mates are so valuable to them, the understanding that has developed after so long makes being together with their friends so easy for them.
The chosen path will be difficult for these youngsters with disabilities who are tackling life in the mainstream-lane. The conductive team will be there to help them on their journeys and one way that we will certainly help is by giving them the chance to spend time with their special, understanding and caring friends.
Posted by Susie Mallett at 01:59