They just keep coming back for more 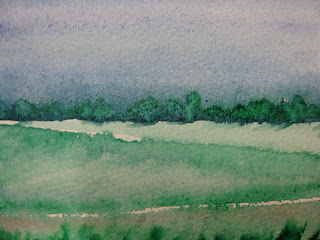 "That green and pleasant land again"
by Susie Mallett, May 2011
I have experienced again and again how, as they get older, children begin to choose Conductive Education for themselves. As our young clients reach adulthood, many return to us, even after a break from conductive sessions for many years. They have been living conductively without input from conductors, but often an operation, a deterioration of movement or simply the wish to be more active, brings some clients returning and asking for our help.
In the summer I had a seventeen-year old lad phone me, after an operation on his legs, asking whether I could give him a week of my time in his summer holiday, and more recently, in the autumn half-term holiday, a thirteen-year-old boy asked his mum to phone me to arrange a week following a very successful operation on his arm.
The older boy had not been with us for about eight years after he moved away to boarding-school. The younger boy was with us regularly until he started high school, returning for a time after a foot operation and now after one on his arm.
The young lad was with me last week. He has grown as big as me, he has a deep voice already but, although he looks like a young man he still wanted to sing all the songs that went with all the actions, and when we did not sing he whistled while he worked.
Both these experiences were eye-opening
These children turning into teenagers have been brought up conductively. They have not taken part in conductive sessions all of their lives but they have experienced conductive pedagogic enough to have developed a problem solving, independent thinking personality. This is what I recognise in the children who return to me. It is not how well they can move, some of them can talk no steps unaided, that tells me that they have been in conductive groups, it is how they think and how there are that has developed from their conductive lifestyle.
Yes, I know that if you ask a teenager who attended lots of conductive sessions as a child to roll over you can usually recognise the “conductive roll”. If you ask teenagers to walk unaided across a room they will often immediately clasp their hands. But it is the way they are as people, how their personalities have developed, how they want to succeed and be involved in life, that for me shows that not only have they attended conductive sessions but they have lived a conductive lifestyle.
It is a joy to work with these returning independent souls. I hope to meet many more of them in the future. Our door is always open.