I wanted to say some more about painting

The following posting and part posting appeared on Conductor in January 2009. 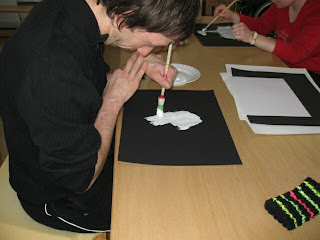 Snow in the city

From drab to sparkly and tingly overnight, just like Cinderella going to the ball!

We walked and did other things indoors, like observing the snow from the window.

I am still so inspired by the snow and the light effects from Norway, with its pink skies at night and never-quite-light days, with the blues and purples reflected in the snow, that I had been talking to my clients about it. It is really quite a change for our senses when suddenly overnight our surroundings change from the winter drabness of the grey and brown earth colours, with a hint of dull green and black branches of trees, to a delight of dancing lightness when it all becomes covered in deep snow.

The white reflects the light and a weak sun changes the colours constantly, shadows on the ground are no longer black they take on colours, either warm or cold.

I talked to my clients about all of this, about the brown-to-white overnight, about the colours and the whiteness, the shadows and the shapes. I did this with the hope of inspiring them in some painting. It is difficult to guide people to see what is there and to help them transfer it to paper, rather than for them to put on the paper what they think they see, without actually looking. It is just as much about changing how we think and see and move as all other aspects of my work.

We attempted some paintings of our German snowy landscape which, although very different to what I experienced in Norway, was still very beautiful. I put a selection of papers and colours on the table and we had thirty minutes' relaxation with music and painting and enthusiasm. 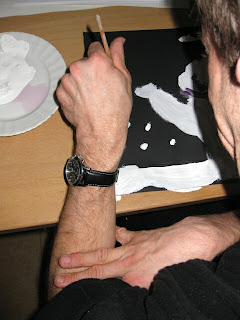 I wanted to say a little bit more about painting

In the Tuesday evening workers group I rarely plan any "extra activity". Most often it occurs spontaneously, depending on time and inclination. This is the advantage of working in a very well equipped and organised environment: everything is at hand, which makes organised spontaneity always a possibility.

Just a minute, was that a hint of hesitation?

The reactions that I received yesterday to my suggestion that we painted the beautiful snowy landscape were very interesting. One woman was immediately engaged but the gentleman seen in a picture on my previous posting and at the top of this one, was very hesitant. This man with athetoid cerebral palsy had surprised himself with his dexterity last week when we were sweet- making and he was about to do the same with painting. His arms, which tend to flail around when he attempts to grasp something, suddenly calmed when he quite spontaneously extended two fingers of one hand on to the forearm of the other hand, which held the paint brush. In this manner he painted to his heart's content! There was not one drop of paint or water flying across the room as he feared might be the case and had prompted his initial hesitation

What did I do?

In the group I give him the opportunity to use his arms and hands in many situations and, as most athetoid clients do, he finds his own solutions, usually by combining the many suggestions that I make to suit his needs.

When I suggested painting he was afraid, as this is a relatively new activity for him and he had yet to discover that some of the solutions he uses in other activities in his life could be just as well implemented here, or very easily adapted. I reacted to this fear by not reacting at all and by assuming that all would be fine (and being, as always, prepared to clear up lots of mess if necessary).

Deviation
I had actually planned on sitting down and painting with them but I was so engrossed in observing how this young man controlled his movements so spontaneously that I got stuck with the camera in my hand instead of a paintbrush.

Again, I ask myself, what did I do? Initially I had ranted on about the lovely light and colours and dancing snow but my client just wanted to give it a go and overcome his fear, especially as the other lady was almost finished with her snow-covered trees. So all I did was to stick the chosen paper on the table, squirt the delicious paint on a plate, arrange three different-sized paint-brushes beside it and say “Off you go”! And off he went, very successfully at that, in the manner described above, calmly creating a picture that he was very proud of.