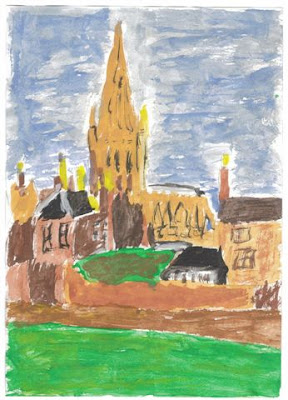 I had a conversation with a friend today, about friends. Yes, I think that it is right to say that this was certainly someone I can call a friend who I was talking too.

We spoke about how not having friends during childhood makes growing up a much different experience than it is for children who have many.

My friend and I both had no friends as children, but I was lucky to have my sister and with her I also got all of her friends. Fortunately for me she had many and they never minded Little Sis tagging on for a small part of the time. for just as long as I could bear it. They never had to ask me to go away, as they knew that sooner or later I would go of my own accord. They actually seemed to like having me around.

Sharing my sister's friends was an awful lot easier for me than having friends of my own. I could just come and go, join in or not, however the fancy took me, and I did not really have to get involved. I had a couple of Teddy friends, and animal friends in the garden, and I had a very faithful three-legged dog called Tim, but no "girly" friends. I found it OK this way, until I got older. In my teens I wished that I had learnt how to make my own friends and not always borrow my sister's.

I found my first ever "girlie" friend, the sort teenagers giggle with and little girls play dollies with, only about four years ago. As I always say, it is never too late to learn, even how to giggle with a friend!

It was because of the importance of children making friends, and the fact that disabled children do not always having the same opportunities to make friends as do their not-disabled peers, that I organised during last year's pre-Christmas bits-in-between time a "Petö" afternoon to which new class-mates could be invited along.

The littlies who had just started mainstream school all brought a child with them from their new class, someone they would like to get to know better. It really was a great getting-to-know-you session. After this breaking the ice together, friendships started to blossom. It was especially successful for the littlie who has difficulty with speaking: she had a bit of help from us to get her started.

This session was so successful and our schoolchildren have been so hard working that I am in the process of organising another bring-along-a-friend session. This time will be during the autumn school break, and this time they really will be friends who come along, not potential friends.

My sister sent me the painting that heads this posting this evening. It was accompanied only with the comment:

“Cathedral [Norwich] water colour. What do you make of my latest attempt at art!?”

I think it is brilliant!

This is the second painting that she has sent me since the beginning of the school term. She is a volunteer worker at the local school and it seems that the six- and seven-year-olds are doing an art project which the adults join in too. The last picture that I received was her own family's heraldic shield, one that she had designed and painted herself, with her family and the dog, her dancing and our new baby.

It was receiving the above picture today that prompted me to write this posting about friends.

All of my life my sister has been just that, my big sister. She is all of twelve months older than I am but it seems more like twelve years, and she is as socially adept as an adult as she was as a child, so when I am at home she can still share her friends with me!

What is most interesting though is that over the years she is gradually becoming my friend too, and no longer only “my Big Sis who knows best”.

It is also no longer only our Dad who sends me his delightful works of art to enjoy, Sis is doing the same now, and she is also asking me for my opinion.

Well, I think that she paints rather well for a beginner and I hear that the schoolchildren think so too.

I have already offered to give a family art session next time I am home.

My wall of artwork by my Mum as a teenager and my Dad as an octogenarian will soon have art by Bis Sis joining it, as soon as I get my hands on an original that is!