My own conductive living - getting into action! 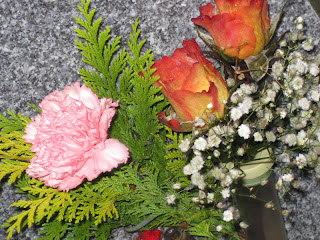 My first experience of the Day of the Dead was at the Museum of Mankind in London when I was an art student. It was there that I bought myself a small Plaster of Paris toy of a skeleton riding a bicycle, that originated in Mexico. That was about 1979.

Several years later I visited Mexico City and saw, in-situ, many of the toys and decorations that are produced for this festival. I could not really believe how the children really did play with skeletons but as Halloween increases in popularity here in Germany I see the children here enjoying ghouls and ghoulish toys just as much as in Mexico.

When I lived in Central Europe, in Budapest, and later moved to Germany, I discovered how All Hallows is celebrated in these countries. Once I flew into Budapest on the evening of November 1st and I will never forget the sight of the lanterns glowing beneath me, left on the graves of loved ones on this day of celebration.

All Hallows is a bank holiday in Germany. It is not a quiet day like some of the bank holidays can be. If you venture out into the city centre or anywhere near a church or a cemetery the world will be buzzing with activity. Whole families will be out and about, on the move laden with beautiful flowers to bring to their loved ones who have passed away.

It was very late before I got myself into action on my day off. I slept a long time and had breakfast for a long time, read the newest Time magazine for a bit longer, before I realised that soon it would be getting dark! It was time to get my long winter coat out of the wardrobe, don a hat, scarf and gloves, and get out into the big wide world!

Yesterday I was out and about on my own, a little bit sad that I had no family with me but soon cheered by the people I came into contact with while under way.

I was off to visit the grave of a dear old friend, a man who died just days before my mother died. On November 1st I take him a flower and ask him to share it with my Mum! My friend was such a gentleman, I loved it when I was at the theatre with him as he looked after me so well, so I know that he will do me the honour of presenting the flower to my Mum with great pomp and circumstance!

This year because I was rather later than usual the flower shops were all closed and the stalls outside the cemetery just starting to pack away their wares. I spied from afar, on the last stall, three solitary carnations. I usually take a red rose and was quite disappointed. I almost decided to return again tomorrow with the flower of my choice, but I lingered and decided that a pink carnation was just the thing for an aging actor, as my friend was. It would look raffish and dashingly elegant, and in the fading light the colour of the flower was so vibrant I was convinced. 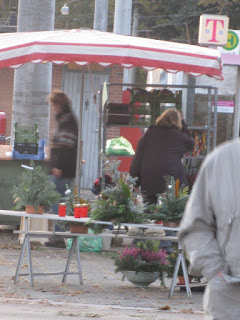 As I approached the stall someone got there before me and she was offered all three carnations despite only having asked for two. I politely asked the lady whether I could have the third one. For the first time ever in Germany my accent was recognised as English instead of being mistaken for Dutch and while the pink carnation was wired together with a piece of greenery I had a bit of a chat  in English. I then made my way with my bloom to the section of the huge cemetery where the ashes of my friend were placed in a wall beside his wife. 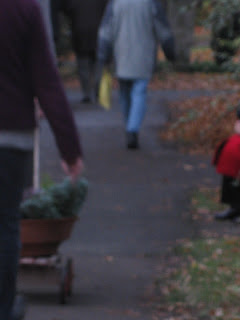 The birds were singing loudly, the blackbirds squawking their evening goodnight calls. Children were running between the red burning lanterns and large family groups gathered under the huge trees in prayer.

It is almost as if my friend had designed the place where his ashes are placed. There is a bench right beside it where I always sit, whatever the weather, for a chat with him and my Mum. 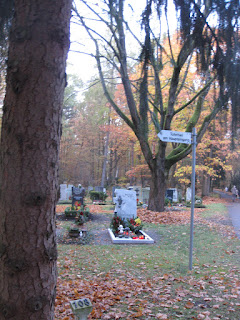 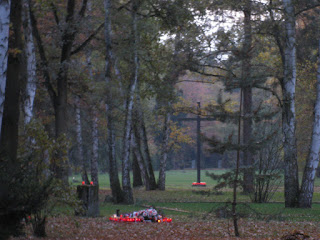 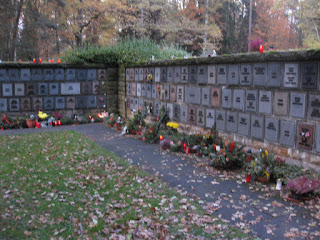 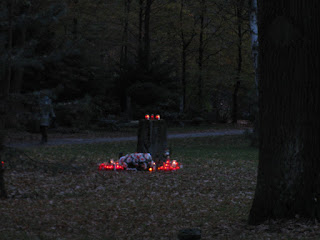 Despite the darkness coming down so quickly it was not cold. The light dancing between the trees and the lanterns twinkling between the gravestones made the atmosphere warm and cosy. I had had a nice chat, had enjoyed the natural beauty of the spot and shared a lovely sunset as I made my way back to the tram-stop. 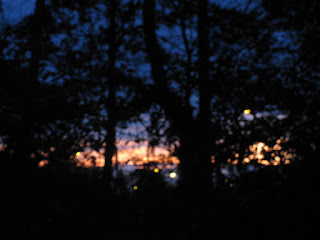 As I reached the central railway station I remembered that I had a rail-ticket that I must buy. It being a bank holiday the counters were less crowded and this made the whole procedure of waiting and choosing the right kind of ticket much more relaxing than on a busy weekday. The whole procedure became all the more interesting as for some reason I got talking to the lady about Aktion Mensch a charity that raises money for people in need. She told me that it is working in partnership with Nürnberg Station and I commented that the children who I work with have just taken part in the Christmas promotional video for this charity (see notes below).

It turned out that the lady at the counter is the mother of a young adult with a motor disorder and she has already made contact with the association that I work with in the search for a new flat for the young man.

It was so nice that there was no queue so that we were able to chat. I was there for about thirty minutes. The lady was so grateful for the opportunity to ask questions and tell someone of their search as a family for a home and work for her son. I was not able to do anything for her myself, or tell her anything more than she already knew, but the lady seemed cheered and motivated by the conversation and I was happy that my visit to a usually very busy ticket hall had been so relaxing.

I finished the evening off with a warming drink in the station forecourt before making my way home. There was a distinct smell of bonfire-night-to-come in the air! As I walked I realised how much I miss my old friend and my Mum and it is good to have days like All Hallows to be reminded of this. 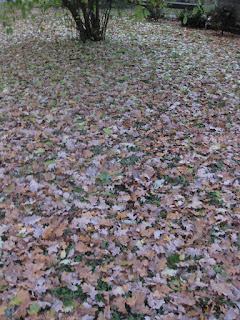 I do so hope that someone brought a rose or a dashing, pink carnation, or even a funny little fir-cone man, to AP's columbarium in Farkasréti temető ! 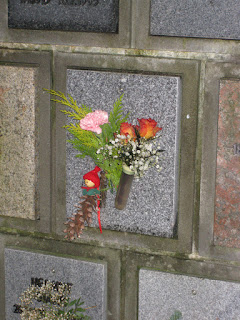 At 3.14 minutes into the video you can see us in our golden clothes. I have an orange jacket on and a white balloon in front of my face!

Here is a still photo –

Photo three; there I am with no balloon!