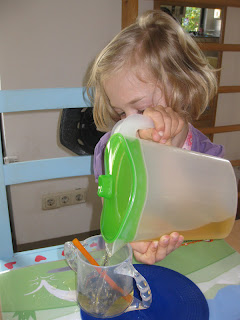 How is that hard work rewarded?
Overcoming the odds and walking onto the stage to collect a conductive award and looking forward to continuing the hard work.

I remember being on the stage last year with my ‘Jolly Professor”, who is ten-years-old.
Despite his parents being led to believe, when he was only three-years-old and before they discovered conductive upbringing, that he would never learn to walk, there he was walking up onto the stage to stand beside me to make a speech of thanks to the President of the association that had provided Conductive Education for him for seven years.

He received help from his Mum to write the speech but he meant every word that he had memorised because he feared he would not be able to follow the words on the paper if he was wobbly on his feet! He got a huge round of applause and there were not many dry eyes in the house.

These public appearances are so important for our clients to realise the extent of their talents and the results of their hard work.

Just as important as the public, stage appearances, like the young man’s in England or Jolly Prof’s here in Germany, are the moments when a child shows a mum, their own or someone else’s, that she can pour out her own drink, or shows a grandmother how she needs to be helped so stairs can be climbed independently.

Every six months we invite parents, family, friends, partners and carers to join us to take part in one of our sessions so they can discover what everyone can do. It is fun but not only that the hard work gets awarded by lots of praise. Most important is that what has been learnt by our visitors gets incorporated in the hard work at home, at work and at play.

Praise indeed at the Summer Fest

We were rewarded by much praise and publicity at the time of the thank-you speech so I was surprised when one of our ‘old parents' approached me and Jolly Prof. six months later at our summer fest.  The 'old parent' was the not so old mother of a son now almost thirty, who was a member of one of our first groups of children to attend Conductive Education in the nineteen nineties. She stopped at our art exhibition for a chat. She told us that she had wandered over as she wanted to tell us that she, and she knows it is the opinion of many others, considers Jolly Prof’s speech, the one he gave months ago, to be the most moving and meaningful part of the whole proceedings.

That Mum really knows about the hard work that went into getting up there on that stage. The family mentioned in the newspaper article above know all about it too, as do Jolly Prof.'s family, that of the young girl in the photographs heading the posting, and many more of you.