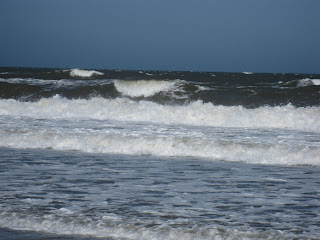 "The north sea at Winterton, Norfolk"
by Susie Mallett﻿, May 2011
Determined and motivated and having fun
A video appeared on Facebook recently that showed children from the Petö Institute learning to swim. They really looked like they were having so much fun and where thrilled that they could move around in the water. In fact they looked just like most children do when they are learning to swim, so determined to succeed, so highly motivated.
http://www.youtube.com/watch?v=kmMsxicG4NQ&feature=player_embedded
I come from a part of England and lived the sort of childhood that made it too dangerous not to learn to swim. I grew up in the east coastal region that includes the Norfolk Broads, a network of rivers and gravel pits and man-made channels that were used to transport the building material to Norwich for its cathedral and more recently for its shopping mall.
Our family activities included river and sea fishing and the whole of the summer holidays spent at the seaside.
I learnt to swim in much the same way as these children with a very strong hand! The hand was either my Dad’s or his brother’s, my Uncle’s. Most of this learning took place in the North Sea, and my sister, my cousin and I all had to learn to swim quickly if we wanted to join in with the family fun!
It was too dangerous to have three children on the beach as often as we were if we could not swim.
I remember that movement that I saw in the video, my Dad did it in almost exactly the same way, a tiny nip on the back of the costume to pull my bum and legs up. And there was that hand just under my tummy like the rings around the children.
We were not allowed to take any inflatable toys into the sea, only arm-bands were allowed before we learnt to swim, the wind was always to strong we would have been carried away on anything that floated.
My Dad and my Uncle learnt to swim in the local river where he spent many hours with his friends. At about fourteen years of age he rescued his drowning ten-years-younger brother and then immediately set about teaching him to swim, so we children were not his first pupils in the water.
I am sure that when I show that film to my Dad he will not be astounded or amazed. It will make him smile for sure and he will think it is just common sense, just more children who must learn to swim.
I am glad that my Dad brought me up. It was the same with the bike. The same technique was used, tough love.
We had to learn to ride a bike we had to get to school and back. I had to know how to mend a puncture he would not always be there.
He taught me everything in the same way as he taught me swimming, he expected me to know how to do it, it was essential to life and he was patient and caring as he taught me.
He also taught me how to put up wall paper, paint a door, put up tiles and grout them, hammer in a nail with the right sort of hammer, put a plug on the end of an electric cable and change a fuse, and much more besides. And once by telephone in my first flat he talked me through putting up a shelf in the kitchen with only a hand drill! It stayed on the wall for several years.
Some people seek good education for their children, or as their career, because they did not get it themselves, but I think one of the reasons that I do what I do is because I got what I got from my Dad.
More recently he has taught me how to double-dig the garden, put the straw under the strawberries, fill, start and clean the petrol-powered lawnmower, and I know that later on, in my annual Indian summer holiday with him, he will be teaching me much more.
﻿
Posted by Susie Mallett at 00:52