Parent and child and conductive upbringing 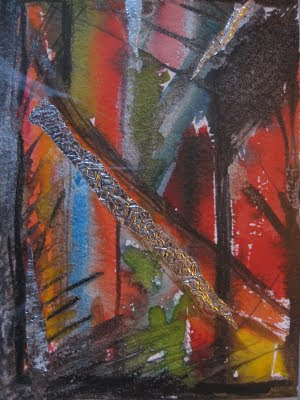 "Reflections on the day" by Susie Mallett, 1983
Learning from Parents

I always enjoy my work with parents; this is for me the most important aspect of conductive upbringing. During the week before last I was at a meeting that was all about working with parents and last week I was putting it all into practise again as you can read about on my other blog:

I cannot imagine how any of our children would have progressed as they have without this communication between conductors and families, without working together at home, at school and in our centre.

Families, carers, parents, siblings and other relatives are the key to the success of a conductive upbringing and it is something that we as conductors should never forget.

I have written about this and more in the presentation that I gave, and much of what I said was emphasized the following day by a report on the workshops for parents that take place at the National Institute of Conductive Education.

There were two more presentations both of which focused on the role of parents and the knowledge they have but for me it was the last presentation of all that brought the meeting to an end that said it all and more most proficiently.

I and I think many of the audience, sat with tears in our eyes, but also with joy in our hearts, when, on the final day of the meeting, we listened to a parent speak about conductive upbringing and what it meant to her family.

I have never heard a parent speak about conductive upbringing as well as this mother did. She spoke about how very early on she understood what it was that conductors and conductive centres wish to give to families and she also knew how living conductively would benefit her whole family and in all aspects of her child’s life. She had found what she and her family needed. It was hard work but it worked for them.

She spoke about how hard it was for her and other parents to learn to let go of their children and allow them to experience the world.

She explained how after the birth of their child they had been given no hope, in fact they had had all traces of hope removed. Having been told that there were no chances of success, no chances of development, no optimistic outcomes to look forward to in the future for their child, she explained how difficult it then was to believe the opposite when, in a conductive group, that hope was being given back to her. She described how hard it was, although she knew it was the only way, to let her son with motor disorders and other disabilities move out of the safety of her furling arms and allow him to move around on a hard surface, the floor or a plinth. This mother said that although she was there in the conductive group because she knew this was the way she wanted to bring up her son it still took her two years before she felt at ease allowing him to take risks just like other children do.

This mother described how she learnt through learning to live conductively how she and her husband could bring up their severely physically disabled son, something that she would have otherwise have had to instinctively learn as a new parent from the child, had he not been born with a motor disorder.

I would love to publish this lady’s presentation, she wrote so much more than I can recount here. She is a busy mum, a family counsellor and a master’s degree student so I will give her some time to respond to my request. I approached her after the meeting suggesting that she speaks at the 8th World Congress on Conductive Education that will be held in Germany in 2013.

For now all I can give you is the URL for my presentation and the website of the Comenius Project where I am told reports from the meetings and the presentations will soon be available for all to read.

Susie Mallett – Comenius Project: Think outside the box, Cooperation between parents and experts: