The dreams of life come true 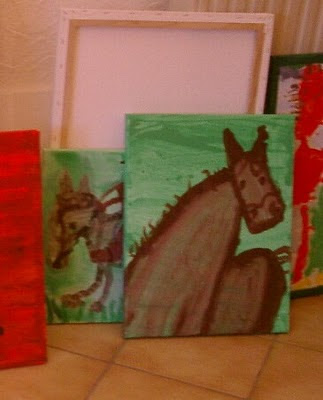 Pictures waiting for an exhibition" by Laddo, 2007

Laddo always rings me when something important happens in his life. He has been trying to contact me since Wednesday, but I have been home too late each evening to return his calls. Luckily he is persistent and today he caught me near the phone!

Life has its ups and downs for Laddo just as it does for us all. His hurdles are often very high meaning he needs a lot of help to get over them. Sometimes his life takes a turn in the slow lane so he can enjoy a settled time.

He has been settling down at work since I saw him in August, life has been a bit easier for him than it was in the last work-group he was in.

He now happily makes his way to-and-fro between home and work, and in the evening he returns to find his family still busy at the family business.

This is what he has desperately been wanting to tell me for days:

One evening last week Laddo returned from work to be sent immediately by his mother to search for his father who had important news for him.

A bit of background before the news

When I was working with Laddo in the summer we stopped for a rest on the village-school wall after an exhausted walk. One of the things we talked about was how he has always been fascinated by the festival celebrating Saint Martin, a festival that takes place on November 11th each year.

There is always a lantern procession through the village preceded by "Saint Martin" riding on his horse and of course the music makers. Laddo loves horses and the story of St Martin but most of all he loves the brass-band music that accompanies all the village festivities.

As the story of St Martin goes, when the procession returns to the centre of the village, each year there is always a beggar leaning against the school wall, exactly in the spot where we were sitting in the summer. The beggar, shivering in the cold night air, is always given by St Martin half of his cloak , which St Martin divides down the middle with a sweep of his sword.

Laddo learnt all the “St Martin songs” and was always the first to be ready for the procession through the village. He was always the one up the front to see the horse and as he got older and realised that it was a performance, re-enacted by players from the village, his dream began of one day being fit enough to play the role of Saint Martin himself.

I said to him today: “ We must always have our dreams so they have a chance of coming true!”

Laddo’s dream started to come true when he went off to find his father last week and listened to the news he had for him.

A lady had been to see Dad and told him that the elderly man, who has played Saint Martin since Laddo was a very tiny laddo, had hurt his foot and could not ride the horse.

Laddo can ride, he has rosettes to prove it. He has been riding since he was four or five-years old. At one time he even had a pony of his own that lived with his Granddad’s cows.

Yes you have guessed. The lady who came to see Dad wanted Laddo to play St Martin.

I imagined that Laddo had let out a screech of glee but he says otherwise, he said he nearly cried.

I think I would have done so too if I had been there. I cannot imagine how Laddo must be feeling now.

He has worked so hard and struggled against all odds to achieve his goals. He is well known in his village as an artist, in many of the homes his paintings are hanging. Now he will be well known as Saint Martin too.

He told me that he must behave like the grown up that he is, because there will be many young children watching him with the same awe that he always held St. Martin in.

He is so proud. He has a little fear that the horse will bolt through the main street with him in the saddle, but Dad will be there beside him and I expect twin brother will not be too far away. Mum will certainly be there with the camera, so watch this spot later for images of the event.

What a coincidence that we talked about the dream only a few months ago and how now it is becoming reality.

Not really a coincidence

Laddo had told his mother about his wishes and dreams. Each person in the village had seen over the years how fascinated Laddo is with the whole performance of St. Martin. What a wonderful community he lives in. The villagers who organise the “show”, at the very first opportunity that arises, thought of Laddo as the person to step in at the last minute. Standing in for the gentleman who has been doing the job for many, many years.

If all goes well I can imagine that the elderly gentleman may feel content to hand over the role permanently to Laddo. There is no one in the village who would take in on with so much gusto and pleasure as Laddo.

He will be riding high on November 11th 2010. A huge thank you is due to those that made a dream come true and congratulations and due to Laddo, who life goes spiralling upwardly and he takes it all in his stride.

Coincidently St. Martin was born in Hungary in Szombathely, in approximately AD 316.

He began his good works as a very young man and was about the same age as Laddo is now when he met the poor man begging for alms.


http://fisheaters.com/customstimeafterpentecost15.html
Posted by Susie Mallett at 18:04